According to Sprenke and Baker before there was a pole at 45S 345W there was a pole at 0S 330W. interestingly many of the anomalies below correspond to this pole pair. The first 7 lie between 37 and 54 degrees from one pole, which implies living on the edge of an ice cap. Then there are two anomalies, the skullface and a face shape in 20200428 that are at 16N and 16S. The table lists old pole latitude as 0 to 180 degrees, 0 is the north pole and 180 is the south pole. The Cydonia face to the Spaceman on the table fall between 34 and 47 degrees on the opposite pole. Four pairs have approximately the same latitude though they are not close to each other.

In this scenario the Cydonia face would be at 45S instead of on the equator of the next pole at 45S 345W. After that according to Sprenke and Baker came our current poles. The Cydonia face is aligned approximately north south to this pole as well as to the next, which means that the shadows it formed with the Viking images could have been intentional. Cydonia is now at 41N and the face is slightly offset to the current north but the shadows would be approximately the same as at this time. The spaceman image also seems to be aligned north south to this pole. The Angel image is also pointing roughly at this pole.

In the photo below A is the position of Cydonia, on the northern edge of this ancient icy area. There are several icy areas radiating out from this and connecting to a blue area further north. This icy area is one pole. The icy areas may represent an ancient connection to a northern sea or ice sheet. 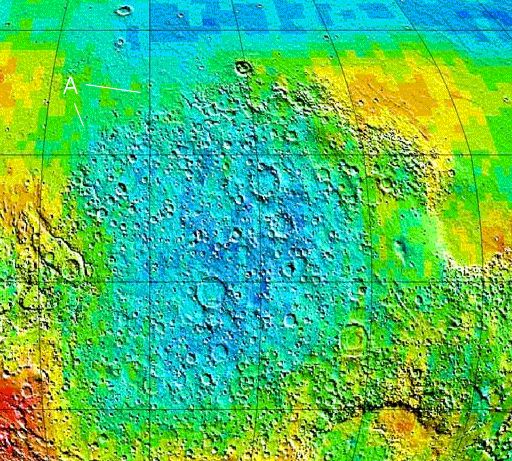