Please note these images are about 5 times larger than the original Kingface, and the extra size is made with smoothing software. This extra size doesn't translate into seeing more detail, in fact the impression is to make the face look less face like. This is because the added information to make the face bigger is not real, and hence is not particularly face like, it just connects parts of the original face. Try zooming on any photo in an art program to 500% and you will see that photo look less real. It's the same here.

When you see pyramid and wedge shapes this is the added information making very small points into planes, and illustrates that enlarging a photo causes distortion. The reason I have enlarged it like this is to accentuate large features. The idea is that I have changed the viewing angle in each photo so you are looking at it as if the photo was taken from a different angle. Next I have changed the sun angle which makes shadows appear to be in different places. The contours are worked out with shape from shading which works out which parts are slopes from how dark they appear in the photo. This is not a completely accurate process, and assumes the kind of soil is the same all over the Kingface, which is something we don't know.

There are then a lot of assumptions and distortions built into the following analysis and one should not conclude anything definite from this. The idea is by changing the viewing angle and shadows higher and lower areas may stand out better. For example some photos show the eye sockets appear to be humanoid shaped with mounds in the centers where the pupils would be.

Other shots accentuate the edges of the face but these show shadows in some areas at the expense of others. In one photo you can see the shadows of a given feature and then in another photo it is as if the feature has disappeared and another has appeared. This is just because the sun angle allows some other features to cast shadows. One should not assume then that because a given feature does not appear in all photos it doesn't exist.

We only have one photo of the Kingface, so this kind of analysis is stretching things to the limit, but it does show some interesting details. The face does appear to have all the features of a normal face in the right proportions.

Images made with Bryce 4.0

The sun azimuth is the direction from which the sun is shining, and the altitude is the angle of the sun above the horizon. 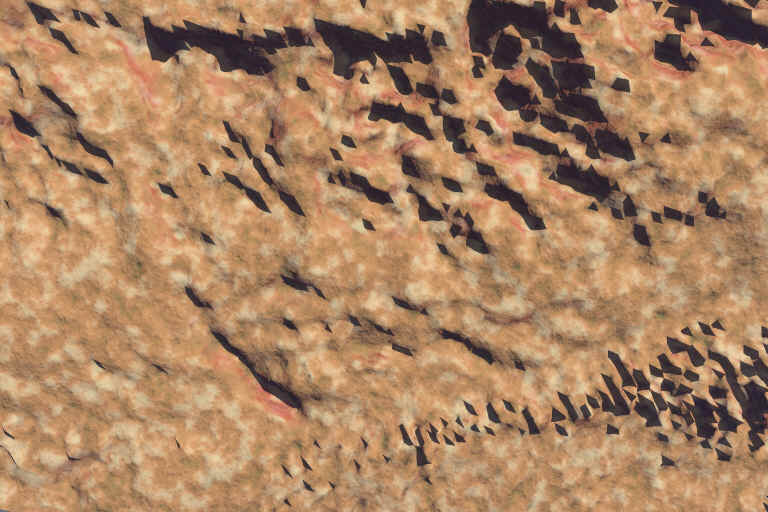 "a" and "b" show how ridges of rock form the upper right side of the eye sockets. "c" shows a mound where the eye would be. The crown appears to  not extend outside of the kingface shape, as if it had been formed separate from the rest of the ledge. The chin and jaw can be seen in the correct shape for a face, the chin protrudes as in a human face. "d" shows teeth like objects in the mouth. "e" shows the nose. 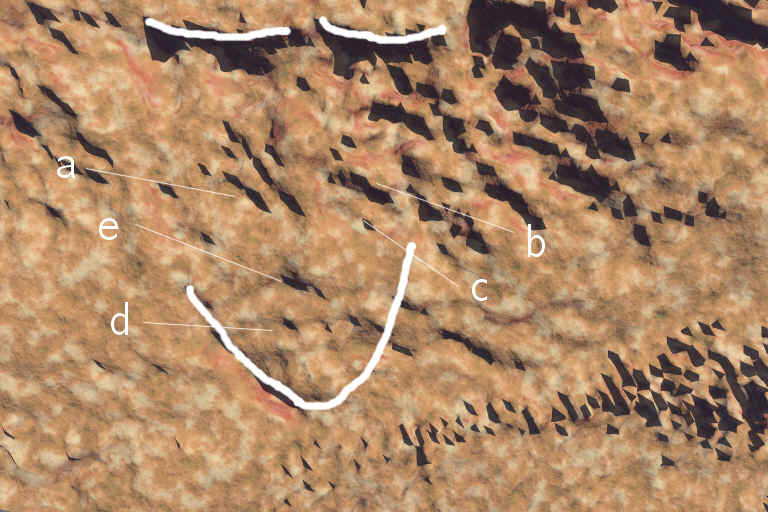