An area to the left of the 3 interlocked faces also appears artificial. It however seems to be partially buried so it is hard to work out the details. Since the 3 interlocked faces overlaid with a high level of precision it seemed likely this face (if real) would also overlay accurately. Consequently I overlaid the Kin Face on it. The photo was rotate to match them up but no distortion or stretching was done. The correlation was quite high in the upper areas, those not buried. An animated GIF of the overlay is on the next page, running from the original area to more and more percentages of the King Face until the King Face is fully overlaid. The image below is half the original and half the King Face.

The corner A is aligned with the two formations. The right prong of A points to this lineup and the left prong points at a line which matches on the two faces.

B shows the other edge of the crown and how it matches closely. This is from rotating the image not resizing it to fit. C shows and area on the King Face that also serves as part of the left face in the 3 interlocked faces. D shows the right hand edge of both faces aligns closely. E shows a ridge on both faces aligns. When overlaid this appears to be coming out of the nostril. F is like an ear area, that matches in both faces. G shows a central crown like feature which sits symmetrically in the center of the King Face crown. H shows another area which matches both faces.

The best way to see these is to watch the animated GIF while monitoring these areas. There are the 3 interlocked faces which overlay on each other closely and this fourth face also overlays closely in the parts not buried. Another face with these properties is even less likely to occur by chance. 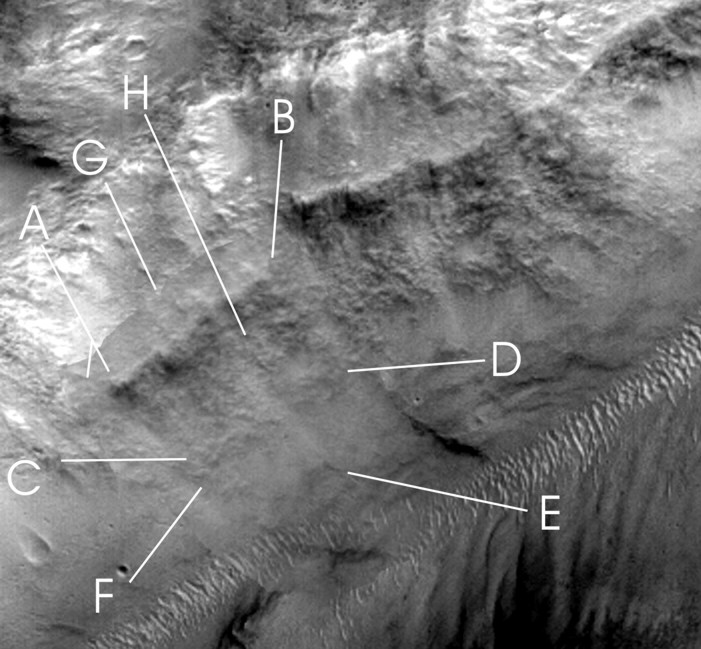